Tonio's provider came from the Royal Northern College of Music. He was an experienced opera singer who sang a number of concerts.

Tonio was first announced at the NAMM trade show and was set to be released back in early February 2010. According to SONiKA, he apparently 'had a sore throat' and was consequently delayed until June 2010. By the end of June Zero-G released a note that he was complete, but final touches were still being made to his program and he would be delayed another week. They stated demos would follow soon, possibly a week after the extended delay was announced.

A demo was released on the July 8th, 2010, he is forecast for release within the next "few days" and was eventually released on July 14, 2010.[1] He had several demo songs, including a duet of Big Al and him singing 'Tu vuo fa l' americano' and a duet with him and Prima singing "Cinque Dieci".

Tonio was released in Taiwan by E-Capsule. He received a new boxart and was featured in a 40 second demo. The full version of this song "Treasure" was later released, in the video Tonio was referred to as "Baron Tonio".

At the end of 2015, it was announced that from March 31, 2016, VOCALOID2 was being retired and no new serial codes were to be issued by Yamaha. Zero-G announced they would continue to issue import codes to legitimate owners of Prima, SONiKA and Tonio.[2] 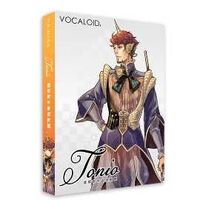