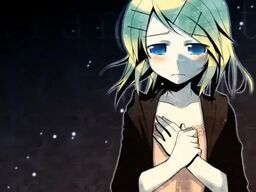 The song was first uploaded on September 12, 2008; and currently has over 500,000 views to date. It's Signal-P's 10th work, and Signal-P's second collaboration with Hiro Tamura. Signal-P stated that it only took him four days to compose the song; with the vocals being both Rin Act 1 and Rin Act 2.

Transmit has been featured in the compilation "DEBUTANTE2" and also became one of the samples for the append "power", "warm", and "sweet" (Rin).

This song may have various meanings for the lyrics are open for interpretation. It could be interpreted as never giving up and believing in yourself.

Retrieved from "https://vocaloid.fandom.com/wiki/Transmit?oldid=872810"
Community content is available under CC-BY-SA unless otherwise noted.