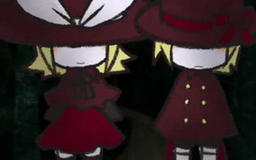 "trick and treat" is an original song by OSTER project and is one of her most notable songs. It was made for Halloween 2008. This is her first work to have a darker atmosphere.

This song tells a story of "you", led by Len and Rin into a deep, deep forest. Although they seemed friendly at first, "you" realized things were not as they seemed.

This song entered the Hall of Legend on November 21, 2011[1], becoming the second Kagamine duet ("Gekokujou" being the first) to do so.

On October 1, 2012 it was announced that along with Ichika and Kurousa-P's Cantarella manga adaptation, trick and treat would also receive a manga adaptation on Nico Nico Age Premium Vol. 15; illustrated by NEGI. Chapter 1 was released on October 9, 2012 for 85 yen.

Hidden until we can organize the Nicoseiga comics.

Len and Rin performing trick and treat in "MikuPa Live in Tokyo" concert.

trick and treat postcards based on the manga serialization illustrated by NEGI.

A spin off to the manga illustrated by NEGI for VOC@PARA.

Retrieved from "https://vocaloid.fandom.com/wiki/Trick_and_treat?oldid=1199890"
Community content is available under CC-BY-SA unless otherwise noted.