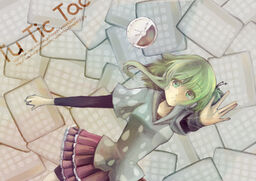 “GUMI sings about a passing love, of whom she couldn't avoid her feelings...”
—maubox's song page comments

maubox's 6th VOCALOID work and 2nd one using GUMI. A a melancholic song, where a girl (GUMI) choose enter in a relationship, despite her intuition warned her this one probably won't last. At the end her fears come true, and after a bitter break-up the girl is left alone recalling the time they spend together.

According the official website, the song's attacks are taken from a demo sung by ankari, and it's her more polished work in terms of audio edition. GUMI's voice wasn't processed in Reason, as the usual, instead being processed in vocal VSTs. It also used Hatsune Miku's voicebank as back-up in the pronunciation of certain parts that GUMI's voicebank had issues.

Alternate artwork for the song.

Retrieved from "https://vocaloid.fandom.com/wiki/Tu_Tic_Tac?oldid=976453"
Community content is available under CC-BY-SA unless otherwise noted.