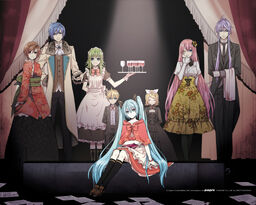 "Twilight ∞ nighT" is an original song by teamOS and is one of their most notable songs. It was uploaded to YouTube on January 20, 2015. This is the 3rd song in the Night ∞ Series. It is told from third person, almost like from an audience's point of view or the Mysterious Shadow's point of view, the one who can witness every scene as it's played out, from the Villager finding the coffins to the mansion's inhabitants' worrying about the missing page.

As the song opens, cardboard cutouts of the cast are seen welcoming the Village Girl (Miku) into the mansion, like in "Bad ∞ End ∞ Night". Everyone parties, but the lyrics this time around seem to focus on keeping all the events of the feast exactly like the script. In the coffin room, The Village Girl is then shown to be the one watching the cardboard cutouts as they act out a previous play, most likely Bad ∞ End ∞ Night. After watching, the Villager then remembers previous plays, and is then shown to be back in her guest room.

The rest of the cast (Len, Rin, GUMI, Gackpo, Luka, MEIKO, and KAITO) have found that both the next page in the script, Crazy ∞ nighT, and the Villager were missing. The time of the play advances, but they can't continue properly if they don't have that page. They suspect of everybody, making conjectures of why would someone steal it. Meanwhile, the Village Girl has found the coffins. A sound came from inside of one of them, and when she opened it using the clock's hands finds the next PagE. At the same time, the mansion's inhabitants find the Villager's letter and decide to open it. Inside it was a blank page, that matched perfectly with the size of the script: the next PagE!

As soon as they put the page back in place, it seems time is moving again, and the play is finally proceeding. But it actually was not: the letter was dyed bad. After all, a blank page will get no applause... The play has run out of time now, and the Mysterious Shadow says "Till another night!".

This has entered the Hall of Legend. It is featured in the albums Vocalosensation, EVER DREAM and Mistletoe ~Kamigami no Yadorigi~.

Making of the video 「Twilight ∞ nighT 」

Retrieved from "https://vocaloid.fandom.com/wiki/Twilight_%E2%88%9E_nighT?oldid=1007680"
Community content is available under CC-BY-SA unless otherwise noted.