"Two of a Kind" is a song featuring Otomachi Una by GHOST. When asked what the song was about on a YouTube comment, GHOST responded by saying it's about a girl who, in her dreams, is the god of space, sees visions of the universe ending, and tries to warn everyone about it.

I told you so, the stars are melting away
And it’s my place to say,
Today, this space will never be the same
For two of a kind

So heed the stars, their light will leave us in the dark
In the depths of our hearts
A time when I was watching from afar
Over two of a kind

You saw, the stars are melting away
And it’s my place to say,
Today, our lives will never be the same
We were two of a kind 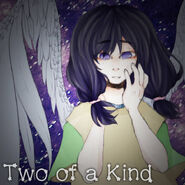 Retrieved from "https://vocaloid.fandom.com/wiki/Two_of_a_Kind?oldid=993940"
Community content is available under CC-BY-SA unless otherwise noted.