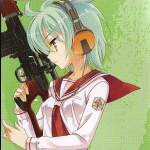 I'll make a longer introduction later, so for now I'll say "Black Rock Shooter" (the concept created by Huke) opened the door to VOCALOID for me. I wish I knew exactly when I first got into VOCALOID, but I am pretty sure it was somewhere in April, between the releases of anonkanon and flower.

About me (will expand later) Edit

My profile picture is an image of Reki, a badass sniper from a light novel series I am very fond of: Hidan no Aria, or Aria the Scarlet Ammo in English. It also has manga and anime adaptations, but like most anime adaptations, it is lackluster in depth and unfaithful to the original source material. Despite not being finished yet, I would recommend the manga if reading is not your thing. It is that much more engaging and faithful to the light novels than the anime. Plus, you'll be able to understand the male protagonist's frustrations much more clearly. The anime I believe failed in conveying any of those understandings.

I appreciate humble rather than elitist behavior. Don't put people down for any innocently inaccurate claims.

As a VOCALOID wiki editor Edit

For now, I simply update the view counts of random songs. Generally, if there is a 25,000+ view count difference between a song's video and its corresponding wiki page, I will update the wiki page's view count. I would like to create wiki entries for songs that don't have one yet, but that all depends on if college doesn't take away my time and motivation.

Another kind of edit I started to make recently is remove redundant links on album pages. Either there is some troll out there that secretly added these redundant links or the system glitched. Whatever the cause, I will remove these annoying redundant links. YOU ONLY NEED ONE LINK TO A SINGER'S NAME!!!

Another thing... I make it that song titles are "quoted" and album names are italicized. I very much prefer consistency between pages much of the time.

9/13: I don't know why, but I feel proud to have just earned a "Lucky Edit" badge. I'm a little hysterical right now.

11/20: A Yuzuki Yukari V4 update!? What a glorious day for my favorite purple moon rabbit!!!

Name (listed in alphabetical order) - Description. Example (not necessarily of my description)

NOTE: If you would like to view the Niconico links but lack an account, simply add ".am" after the ".jp" in the URL. Alternatively, you may search for these songs on Youtube.

Hatsune Miku is a producer powerhouse, having over 8,000 songs uploaded per year. GUMI only manages to release over 2,000 a year, but she still has a considerable impact and can arguably be called Miku's greatest rival. The vocaloid with the third highest upload rate is IA, who barely manages to exceed Megurine Luka and Kagamine Rin's upload rates. However, IA has clearly created a shift in the fandom since her 2 year release, effectively becoming the most popular VOCALOID3 and rivaling Miku's popularity rate back during her initial VOCALOID2 release. Kagamine Len is the most popular male voicebank with producers. His upload rate is over twice the rates of fellow male vocaloids KAITO and Camui Gackpo. Yuzuki Yukari lags only slightly behind Len, and is the second most popular VOCALOID3 after IA. The third most popular VOCALOID3, Aoki Lapis, has a slower upload rate than all the above mentioned VOCALOID voicebanks. All other vocaloids with slower upload rates than Lapis manage to release a fraction of a song per day.

Retrieved from "https://vocaloid.fandom.com/wiki/User:AcobraL?oldid=366903"
Community content is available under CC-BY-SA unless otherwise noted.