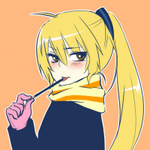 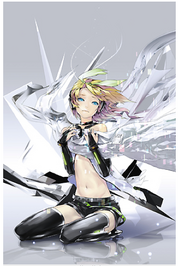 Hello, you can call me BfD if you'd like. But my prevalent internet alias elsewhere is either Eden or Pixeldust.

I'm a 25 year old from Canada. I've had an on-and-off interest in Vocaloid since 2008. I don't own the software itself, as I'm more proficient in visual arts than audio, but immersing myself in the vast creative works of others keeps me very inspired throughout my life. ( ´ ▽ ` )

I don't know what else to talk about so I'll just list a handful of interests: I'm an aspiring visual artist. My favorite non-Vocaloid musicians are Boards of Canada, Ulrich Schnauss, Oneohtrix Point Never, Aphex Twin, and Akira Yamaoka. I'm a huge cyberpunk junkie. I waste too much of my life playing video games, and the vast majority of wikis I edit are pertaining to that medium. My favorite films/TV shows are Blade Runner, AKIRA, Ghost in the Shell, films set in the Marvel cinematic universe, Hayao Miyazaki films, Serial Experiments Lain, BBC Sherlock, and Hannibal. If I had "character item," it would most definitely be iced tea.

About my stupid account name, if you're wondering: I signed up at Wikia over six years ago and haven't bothered to create a new account to keep my edit counts intact. And I'm very disappointed at my past self for choosing a cringy name during my ~edgy~ phase. (I think I was obsessed with Kingdom Hearts at the time. Or something else edgy preteens obsess over. I don't know.)

Some articles I've created. This is mostly here for personal reasons (so please ignore it)

I have a bad habit of creating song pages with the bare minimum of content added, with intention of completing them at a later time, but completely forgetting about them later.
I am sorry ＿ﾉ乙(､ﾝ､)_

Sorry, it's only Miku songs at the moment. Maybe I'll get around to adding more variety once I have a bit of spare time... I randomly put together a Vocaloid EDM-themed playlist on Youtube if that interests you at all. Also, I have a NicoNico mylist of my favorite Vocaloid songs (the ones uploaded to NicoNico, anyway). Bleh.

Retrieved from "https://vocaloid.fandom.com/wiki/User:Born_from_Darkness?oldid=787042"
Community content is available under CC-BY-SA unless otherwise noted.