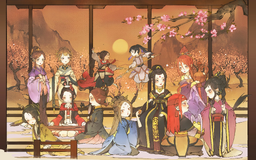 "Wàngǔ Shēng Xiāng" is an original song featuring Luo Tianyi. It was written for the bilibili 2020 New Year Gala.

This song exceeded 100,000 views on bilibili and reached 1 million views in a day.

Retrieved from "https://vocaloid.fandom.com/wiki/User:NebulousViper/Sandbox?oldid=940389"
Community content is available under CC-BY-SA unless otherwise noted.