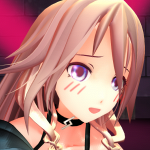 Hello there! Thanks for stopping by. \(^o^)/
I've been coming here for the past 7 years. I used to edit a lot more in the past, but I'm mostly a lurker nowadays. You may catch me reverting vandalism, fixing errors, and adding missing things.

I also really like Gackpoid (V3/V4 only), Yuzuki Yukari (especially her VOICEROID! XD), Len, Rin, Iroha, and YUU. (CUL, Miku, Luka and Mew are all good VOCALOIDs, too.)

I actually used to really like KAITO (V1), but after listening to V3 VOCALOIDs, I couldn't listen to him anymore! >_< But I do like しゃぼんのサラマンドラ (Shabon no Salamandre) and some of his V3 songs.

I really like Luo Tianyi, Bruno and MAYU's voices a lot, but I don't listen to them very much......

I really like Mew's voice a LOT in ツンツンごっこ (Tsuntsun Gokko), but I have yet to find another song with her that I like...

Some of these VOCALOIDs make me laugh if they are used for comedy but I can't take them seriously...

I also dislike the sound of the V1 engine, so I can't enjoy any of the VOCALOIDs released for it.

*Note: I'm not actively searching for songs using these engines. The engine noise stops me from liking them as much as I'd like to.

Here are some that caught my attention when I first heard them:

Retrieved from "https://vocaloid.fandom.com/wiki/User:NekoMoonbow?oldid=958960"
Community content is available under CC-BY-SA unless otherwise noted.