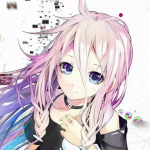 I am RayGirl. I am a female user who is interested in songs that had been composed by producers.

I was used to listen some Vocaloid songs, mostly from games. Sometimes, I have listened to some songs thru online video. It was based on my own curiosity of listening to songs that has been appeared on the list.

I am used to listen to IA songs because her voice is like a crystal of herself. She has been around here for a quite some time. When I listened to her voice, it feels like that I am with her. I have been exposed to IA since the game called IA/VT -COLORFUL-. It has a lot of songs from the release of their uploads to albums. Her songs are really great and I really like listening to her voice more often.

Before I discovered IA, my main Vocaloid that has been with me is Hatsune Miku. Hatsune Miku is a virtual singer that comes from the future. That time, I was really interested to futuristic-digital based. When I listened to her voice, it feels like that I am in the future of finding answers to my life. I have known her since Project Diva series. It has some good songs of hers and I feel enjoy listening to her voice.

Not just Miku that I listened to, but also there is Kagamine Rin. Kagamine Rin is also a virtual singer alongside with Miku. Her voice is like her mirror self. When it comes to the word "mirror", it feels like that I was having trouble with myself. It was like talking to myself as well as questioning about life. I have known Rin since she has been with Miku in the same game. Her songs are really good and her voice is as young as Miku's.

I like to listen to upbeat songs. It makes me want to find a new identity of myself. It is really energetic and also ecstatic at the same time. Sometimes, I listen to dark songs, not too dark. Those songs are based on their life. My life is almost making me to give up my life but I have things to do in this world. My perspective is to find positive thoughts about this world and not give up on any life that has been thru.

Listening to songs is what makes me to live in this world. Every songs that they make are the feelings of humans have. Every time that I listened to, it feels like that I must move on my life without negativity.

Retrieved from "https://vocaloid.fandom.com/wiki/User:RayGirl0712?oldid=909980"
Community content is available under CC-BY-SA unless otherwise noted.