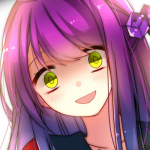 I'm Tokina and I'm a French user on this Wiki! ^^ I'm currently moderator for the Vocaloid Wikia Discord and also content moderator since end December 2018. And this is my bot, Tokikobot, who is updating view counts automatically every 10 days :D

seleP's page update is my main priority. Can also do the updates for the pages of mothy, Eyeris or Circus, but in lesser priority. Can also revert known vandalisms and do some repairs. And doing some little tasks by there. Or also doing anti-spam vaccines for the wiki (I see a spammer, I knife them up, understood? ^^).

- connected: online on comp
- inactive: either AFK either on phone, reduced activity
- busy: on comp but doing something else in priority (school/work stuff or microphone registering)
- offline: sleeping (also when phone and computer both turned off)

Note: be careful as I sometimes forget to turn off the computer and Discord while sleeping... And the custom status (including the icon) reveals what I am doing (or my producer identity is doing, "my other self" as I call her).

Very available when the icon of the knife, the dagger, the heart, the piano or the writing are online ; otherwise, may be slow to answer.

Note: I'll always refer to my producer identity as "her" and not "I", be aware of that.

Also I am here mainly as a Vocaloid "fan". Only use the discussion page for questions about this "identity" (and other Wikia's related discussions). Thanks :)

Please do not create a page for my producer identity neither for her original songs. I insist on it.

I'm currently under VOCALOID4 editor for working, but I also have the V3 motor. These are the VOCALOIDs I currently have, in order I purchased them (or got offered). I currently have 10 different characters.

Edition beacons that I use

Please note if the most are used on this Wiki, some others may not be present for Vocaloid Wiki.

Many of my edit summaries and my beacons are also explained here.

Ever wanted to know why such beacons? Here you are! :D

I always display the reasons of the edits. In general, when there are major and minor changes (ex: adding an invisible comment and removing reprints), only the major ones may be listed. Most of time, the reasons are written in the "cold" way: neutral formulation, just listing what has been changed. However... Be also careful if the reason of editing adds some precision (doubt about an edit, warnings). :)

-> if there is the additional sub-beacon "(suspect)", means the IP post that is used as template is suspect and a sort of possible spam, the protection is done with a preventive purpose.
-> if there is the additional sub-beacon "(heuristic)" or any similar sub-beacon, means the title hasn't been spammed yet, but is derived from a true hit and is considered as a possible future title used by the spam bots. (ex: regex derivatives, similar terms or synonyms etc)
-> if the beacon "[Scripted]" is added, this means the vaccine has been done thanks to MassProtect instead of the action=protect of each title page (protections of list of titles or titles with specific Unicode characters such as "?")
-> if the beacon "[VARIANT: string]" is added, means this title is known to be a variant of a spam bot type. Personal help used for retrieving titles of a same group for Phalanx requests
-> if the beacon "[PHALANX_COMPLEMENTARY]" is added, this means the title is normally blocked by Phalanx, but is protected in case the system fails to block the title

French is my native language, and I have an official certification for English at C1 level. I have a moderate level for Spanish (school level). Very low level for Japanese (still learning) and Latin (first scholar level then lost a lot).

Status: On going. Is using Tokikobot's account to avoid to clutter activity feed. Please refer to the beacon "[HUMAN MODE]".

Take from this page all the song pages containing the former template and replace it by the new one. Some other minor corrections can be done at the same time.

This task is shared with some other users. The total of pages to treat is estimated to a bit less than 1,500.

Pages are taken in a random way.

Status: On hiatus. May be dropped if Bunai decides to delete the pages. Next: SF-A2 miki/Original songs list: D

The pages that already have been done are not listed anymore in the table.

Will proceed in the order of the template (first lines to last ones). May also treat pages with very few links first.

Please understand that this task may take up several weeks/months to be achieved (average editing time for one page: between 20 and 30min)

Absence of proofs for original links for original songs, missing producer names may also considerably slow down the task process.

Going through the song listing original songs for each Vocaloid. Add missing producers if they are known. Remove reprints and replace links by originals. Update status if needed.

Going through the song listing cover songs for each Vocaloid. Add missing producers if they are known. Remove reprints and dead links, replace links by originals and update status if needed. Check all vids manually.

Add a comment in invisible for reprints's prohibition. ( Do not add any reprint to this list as they are not tolerated anymore on Vocaloid Wiki.  )

Status: will begin when other task will be finished.

Remove any reprints listed in the series pages. Add a comment in invisible for reprints's prohibition. ( Do not add any reprint to this list as they are not tolerated anymore on Vocaloid Wiki.  )

Status: current, in same time as other tasks

Tmbox is defunct since August 2017.

The company behind muzie officially closed on May 31st, 2017.

Set the "defunct" tag to any Tmbox/Muzie official link.

For derivatives having links on these platforms, remove the links.

Section for tasks that can return at any moment but are currently inactive because the sub-tasks have been done.

Check the quality of sub-templates for Mirai, Akari, Qingxian, LUMi and Sora. Ref to Navbar contributions.

Create the missing pages and apply the reprints removal task (here: applying invisible comment for no reprints). Any subpage will be created no matter the status of the Vocaloid. The template being used for song lists will be updated progressively.

Going through all articles in Hall of Fame then Hall of Legend and remove any dead link (especially reprints).

The reprints were not removed if they were still online. (treated in next task)

Going through every section of type "featuring [[insert Vocaloid name here]]" and remove all the reprints that are not authorized (= do not have this mention).

- Second inspection: derivatives and alt versions (only if exists)

- Think to remove all the dead links at the same time (reprints, derivatives links...), re-do some formattings if needed.

- Apply the "no reprint" template for the producers who are known to not authorize reprints.

Going through the Producers category and remove all the reprints in featured works.

Remove dead reprints. Modify or update the comments for any official links if their status change (unlisted, private, deleted etc).

An invisible comment may be added at the top of featured work list (acts as a temporary info, and if layout and policies are updated, the comment will be removed). The comment that will be added is the following:

Do not add any reprint to this list as they are not tolerated anymore on Vocaloid Wiki.

Unofficial/unauthorized reprints are not tolerated on this Wikia, and all the official links, even if there are mistranslations in subtitles/caps, have to be added.

Going through the pages of each Vocaloid character and inspect the song examples templates. Remove any reprint that is not authorized. Remove the dead links if there are some.

In the case where a part gets totally emptied (the only links were reprints or the song is no longer available on any platform), search in the notable songs examples a popular song that hasn't been listed in the template yet (else let it empty).

If the template is empty or the voicebank too recent, its page will get skipped.

Will proceed in alphabetical order.

Going through the pages of listing notable songs for each Vocaloid and remove any reprint unless listed as being authorized.

Locked pages (without any work on it) will be skipped.

A comment will be added after the template of the intro: Do not add any reprint to this list as they are not tolerated anymore on Vocaloid Wiki.

Will proceed in alphabetical order.

On the current existing page: replace all the templates in the hierarchy by a link towards the new pages for each year.

Create new pages along with their headers and the navigation tabs (modify them in consequence). Add the concerned original songs to them. Build the organization so it is also communicating with the main page at least.

Retrieved from "https://vocaloid.fandom.com/wiki/User:Tokina8937?oldid=975337"
Community content is available under CC-BY-SA unless otherwise noted.