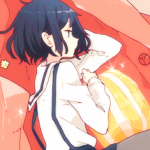 Did I edit something incorrectly? Please tell me ASAP 'cause I'll be more than glad to know so I can do better in the future. All I ask is please be nice; thank you!

Status: Nowadays I'll either do a good amount of edits or none at all so it's inconsistent (however, there's a more than a good chance I'll be on a different wiki; I go on several unlisted wikis for example game ones like The World Ends with You, other game wikis, etcetera). ...otherwise I might modify this profile page, comment, things like that. Right now, I'll only edit, contribute, and whatnot once in awhile. Other times, I might only make an edit several days before I do another one.

Hello! You can call me wint. See any spelling/grammar errors on the wiki? Tell me, and I'll check them out once I see them! ^ ^

[ There's a fairly good chance that I'll be editing this introductory profile section multiple times. If that bothers anyone, feel free to tell me to stop or lay off of it whenever you'd like. ...uh, the problem is, I wonder if I'd see it.; If I don't notice it after a long time, whether it's a blog post reply, a post on a blog entry, a message (?), please go ahead and keep trying to get my attention to make you halt my stupidity. Why do I keep modifying this? Well, the last time I edited it, I didn't have any sleep and it was nine in the morning. There you have it; also, with things like this, I'm an abnormal perfectionist, hahaha... but in the end, not really. I give up most of the time tbh. I both am and not. It's a mix, and, I'll stop rambling now.; ]

This is pretty atrocious honestly why would people read this. Yes, I know this about me section is super long.

Anyway. Have a nice day! Thanks for visiting (this super long page)!;

Retrieved from "https://vocaloid.fandom.com/wiki/User:Wintear?oldid=474575"
Community content is available under CC-BY-SA unless otherwise noted.