VOCADOL was a mobile game released in December 2015 by Project VOCADOL. The game's theme song is Kokoro Charge Music.

The game was unveiled on December 6th, 2014 when the webpage and twitter page went live, with and an announcement that more news would be unveiled at Comiket 87.

As of August 26th, 2017 the game servers have officially been closed down making the game no longer available.[1]

Its genre is described as idol training and mystery adventure.

The storyline takes place in a multi-tenant building in Shinjuku, of which the 3rd (and most quiet) floor is the location of Utori entertainment productions. It is broken up into fragments focusing on each girl, the following is a summary of these sections.

The story begins focus on Kokone, after a introduction she asks someone if they have heard of Vocadol. She invites her conversational partner to sit down while she makes them some cinnamon tea.

Kokone goes to greet a customer to find that only Mizki is there, Mizki being the only reliable one. It turns out Lapis made too many cookies again and everyone went to hers. Suddenly they hear a shriek from the room next door, which houses a detective bureau.[2]

The scream came from Lapis, who had delivered cookies to the detective and the bureau as usual. When she came, the door was ajar. When she took a look, Cul was attacked and her arm was left bleeding. They were attacked by a scary-looking man with a scythe, and the fact that Cul was so easily attacked startled them. Merli was with Lapis also. When they find her she was binded by a cloth. They wonder why they were attacked, when they had no relation to the detective at all and were simply renting the office next door.[3]

Lily (who had just returned to Japan) appears with Kanon, wondering if everyone is okay. With Lily's ability to speak English and Kanon's agility they felt they might be able to get the criminal behind the attack.[4]

When they interrogate Cul and Merli further, they find that the "scythe" was the arm of a praying mantis.[5]

Within the game, each character is given an age, birthday and likes/dislikes. Note: This is only canon within the game and not canon for the VOCALOID products overall. The featured idols are: "MIZKI" (VY1's development name), anon & kanon, Aoki Lapis & Merli, CUL, kokone, and Lily. 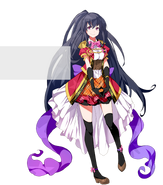 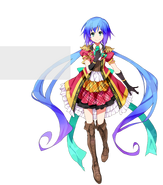 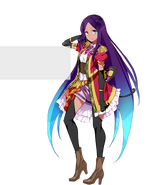 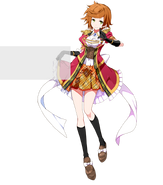 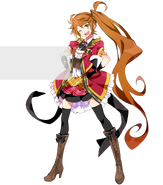 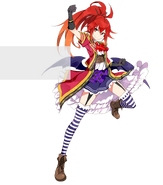 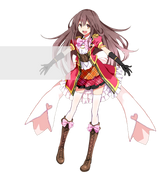 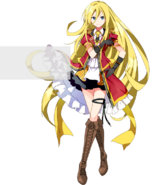