The Yamaha VOCALOID Keyboard is a keyboard designed to use the VOCALOID-board technology. Although the product was not originally made for commercial use and was offered to interested businesses,[1] the keyboard was put up for sale in Winter 2017. VY1 is the default voice bank for the product, while Hatsune Miku, Megpoid, IA, and Yuzuki Yukari were later added as alternate vocals.

The VOCALOID Keyboard uses VOCALOID technology to recreate and produce Japanese lyrics. The user's right hand plays the notes for the VOCALOID software to sing, while the left hand types one of several letters. The exact pronunciation will depend on the combination of letters touched. Only a Japanese version has been made.

Accessories, such as travel bags for the Keyboard, are sold separately.

The Keyboard requires practice, since not only does the user need to be able to play a keytar, but also form words. As such, it can be hard to get good results compared to the actual software versions of VOCALOID, but this simply is due to the fact the results are "live" and give instant feedback, whereas the software versions allow for delicate editing per sound sample and note.

Prototypes of the VOCALOID Keyboard had been developed as early as 2011. Early versions were designed after MIDI keyboards, with buttons designated for speech prominently located to the left side of the keys. By 2014, it was redesigned in a keytar style, cutting down on the extra plastic of the earlier designs.

A newer version of the keytar prototype was displayed in 2015, with the product idea centered on being able to use VOCALOID in a new way without the use of a PC. Once again, VY1 was the voice behind the product. Several models in black, white and pink variations were showcased along with this reveal.[2][3][4]

A pale blue version was shown in a article on VOCALOID NET. The 37 key prototype was showcased at the "Two Yamahas, One Passion" exhibition at Roppongi Hill from July 3rd-5th, 2015, which displayed technological designs by both Yamaha Corporation and Yamaha Motor Co., Ltd.[5][6]

A demonstration was also later given.[7]

In September the final details were posted. The keyboard is a rented product from Joysound for 500円 + tax.[8]

In December a special event was held in which the first major appearance of the VOCALOID Keyboard was used. In the event, Megpoid V4 was used as the voice within the instrument.[9] At the "Think MIDI 2015" event, a demo of the keyboard was seen.[10] Later in December, a Yuzuki Yukari version began development.[11]

The keyboard officially began sale in Winter 2017. The voices initially listed as availiable for the Keyboard were VY1, Hatsune Miku, Gumi, with Yuzuki Yukari and IA's vocals added to the roster later. The keyboard comes with VY1 as standard, as well as additional vocals being made possible to purchase via the product's app. However, the first of the remaining 4 available vocals (Hatsune Miku, Gumi, Yuzuki Yukari and IA) is free.

A limited edition version with Snow Miku 2018 stickers was sold at the Sapporo Winter Festival. This was available while stocks lasted.[13]

The instrument was one of 4 Yamaha products also nominated for an award in the 2018 "Good Design Award".[14]

Additional voices are purchased via the related app for the VOCALOID Keyboard, each voice is sold separately.

The Yamaha Vocaloid keyboard prototype in 2011

White version of a unknown design 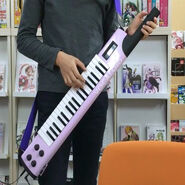