VOCALOID NEO is the version of VOCALOID3 for Apple's OS X. VOCALOID NEO also works on Windows, but the main reason for its release was to have an editor compatible with OS X Computers.

It was first announced on July 24, 2013. Users who own Windows versions of vocals released for VOCALOID NEO will be able to get an installer for this version as well. However, users will have to uninstall the Windows version to be able to install the NEO version.[1] In July, Internet co.,Ltd also acknowledge support for the newer engine and stated they planned to re-release Mac versions of the VOCALOID3 line-up. Users who registered with them for updates would receive the Mac version free.[2]

Otherwise, aside from being able to install the software on a Mac, VOCALOID NEO is the same as the Windows VOCALOID3 version. However, it will not be able to import any vocal not able to be installed on a MAC computer, offering limited vocal options.

While NEO version of VOCALOID Editor for Cubase was released it is currently the only NEO editor available. However, Crypton's software Piapro Studio is also able to use a NEO vocal that is installed on a Mac computer, without the Cubase editor.[3] A trial of the VOCALOID Editor for Cubase NEO and Mew NEO was available to download though has since been retired.[4] Mew NEO's trail can be used for the VOCALOID3 Editior.

In December 2013, a starter kit was introduced for both Windows and Mac users. This contained all the essentials to begin VOCALOID production. Included inside the box is VOCALOID Editor for Cubase and Cubase7. It should be noted that VOCALOID vocals are sold separately and do not come with this version. 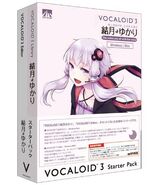