VOCALO Revolution was a VOCALOID related one off TV program that aired in Japan on January 3, 2011.

The show was about the Japanese VOCALOIDs and consisted of interviews with the developers of the software, as well as popular producers within Japan. It showcased the latest PVs at the time.

The TV show was also aimed at expanding the awareness and acceptance of the VOCALOID "culture" within Japan. One of the successful stories was the "VOCALO Revolution x CECIL McBEE" school line of clothing "MUSIC × FASHION × DANCE".[1][2] A DVD of the show was later released.[3]

All channels the program aired on are Japanese and no air dates for outside of Japan are known.[4]

REV, was an original character unveiled on the VOCALO Revolution official website in May, 2011 and was intended to be a male counterpart to CUL. He is described to be about 18 years old [5] and similar to how CUL used the voice of VY1 in music videos, REV was meant to use VY2's voicebank. A 3D model for MikuMikuDance was also released soon after his introduction bio by MikuMikuDance modeler Kio.[6][7].

In September 2020, it was revealed by Hiroto-P on Twitter that REV was planned to become a VOCALOID like CUL, however progress on the project fell through.[8][9]

On May 23, 2021, REV recieved a speech library for the AI text-to-speech synthesizer TALQu [10][11] and a beta singing library for the DeepVocal singing synthesizer on May 24, 2021[12][13]. He is voiced by Hiroto-P himself and a commercial voicebank for REV is being considered based on his popularity.[14][15]

Lucia (るちあ) is a toy poodle companion that is said to live in CUL's neighborhood. An official Twitter was set up for Lucia [16][17]

Throughout 2020, Hiroto-P had been composing tweets in regards to CUL and the many parts of her project, including REV's VOCALOID project ceasing development. He revealed that CUL had conceptual sisters themed around the following colors: blue, white, yellow, and red. It was also confirmed that she had a twin sister known as "Black CUL" (Wet Crow).

In response to a fan, Hiroto-P also expressed interest in updating CUL but did not give further details.[22]

VOCALO Revolution held a song contest. Songs were to be uploaded onto NicoNicoDouga by Feburary 28, 2011 and only required using a female VOCALOID.[23] 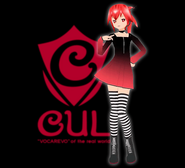 CUL standing next to the VOCALO Revolution logo. 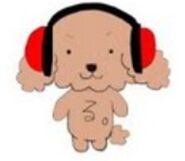 Lucia, a toy poodle that is said to live in CUL's neighborhood.