"VOICES" is a remixed Japanese song by tilt-six featuring Hatsune Miku. The song is based off of an EDM, non-lyrical song of the same name. The video was created as a collaboration between iXima, tilt-six and Sony to promote the new Sony XPERIA smartphone.

Throughout the video, Miku is seen flying through the city and using the smartphone to take pictures of her surroundings, as well as find information about herself and the world .

The song was released as a single. 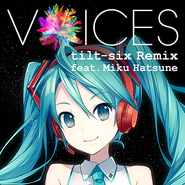 The cover of the "VOICES" single.

Retrieved from "https://vocaloid.fandom.com/wiki/VOICES?oldid=985919"
Community content is available under CC-BY-SA unless otherwise noted.