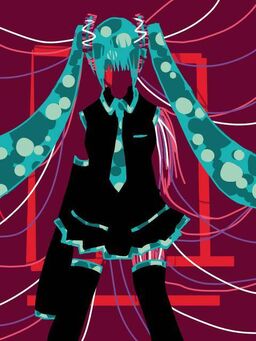 "VOiCE" is a song by Lovely-P featuring Hatsune Miku. It is Lovely-P's third and most popular VOCALOID work. Although somewhat vague, the lyrics can be interpreted as a love song, not in a typical romantic theme, but in the sense of sacrificing yourself for the sake of someone you love.

On March 14, 2015, a novel adaption of the song was released by Beads Log Bunko. It was written Akizuki Shio (秋月志緒), and the illustrations were handled by Horiizumi Inco (堀泉インコ).

Concept art by Shinrei for the ＳＧコス２ contest.

Cover art of the novel adaption

Retrieved from "https://vocaloid.fandom.com/wiki/VOiCE?oldid=1102886"
Community content is available under CC-BY-SA unless otherwise noted.