This article is about the VOCALOID4 software known as a voicebank. If you are looking for the VOCALOID concept then click here.

On November 20, 2014, VOCALOID4 was officially announced through a livestream in which several companies appeared announcing their upcoming updated VOCALOIDs. VY1v4 was one of these VOCALOIDs revamped for the new engine.

Its voicebank was used to showcase the new features and capabilities of the VOCALOID4 engine. It was revealed that VY1v4 also contained four voicebanks: Normal, Power, Natural, and Soft.

VOCALOID4 and VY1v4 became available on December 17, 2014, making it the first voice to be released for the engine.[1]

Shortly prior to VY1v4's release, the YouTube demo uploads of iNSaNiTY and COSMONAUTS were set to private due to YAMAHA's request. They were once again made public after VY1v4 was released.

Yamaha has since released a "Creator Pack" for VY1v4. This is similar to the Creator pack released for Fukase. This product contained a physical product called "UR12", a USB powered audio interface device. The package also included the "VOCALOID4 Editor for Cubase", a copy of the DAW software Cubase AI, and the VY1v4 vocal. 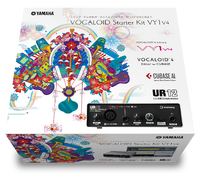