For other uses of "Versus", see Versus (disambiguation).

VersuS is a concept album by Hitoshizuku-P x Yama△, with the theme being "opponents" such as light and dark, and lies and truth. It includes nine tracks, featuring seven new songs.

The crossfade can be seen on Youtube and Niconico. 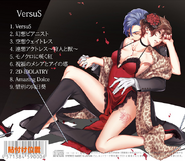 Backside of the album

Retrieved from "https://vocaloid.fandom.com/wiki/VersuS?oldid=987173"
Community content is available under CC-BY-SA unless otherwise noted.