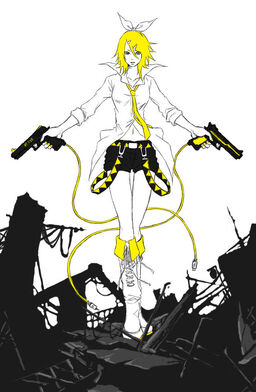 "The Virus Resistance series" is a series featuring Kagamine Rin & Len by Minus-P. It is about the struggle between an older Rin battling against viruses in a post-apocalyptic future after Len sacrifices himself to save her. The songs are characterized by the use of the staccato and voice breaks to increase the expressiveness.

The Prequel to the series.

In the first song, Rin is attacked by a deadly virus that diminishes her voice and makes her body grow weak.

She sings as best she can, screaming out in pain and while having difficulty getting some words out, represented by staccato and some buggy vibrato. The PV uses several stock videos of war, implying some war had happened to wipe out life, as she promises vengeance on the viruses.

In the second video, Rin sees herself as a young girl before passing out. She then wakes up to a stark, bleached world full of broken parts, her right arm completely destroyed. She walks throughout the wasteland, searching for pieces of metal to reconstruct herself.

During this, she sings about wanting revenge for the person she had lost.

In the final video, Rin has become a sort of a vigilante. She now has a new right arm made of replacement parts, covered up by a stark black sleeve that resembles her character model's. She also has all new weapons, as well as some sort of futuristic motorbike.

Throughout the story, she warns the viruses that she will now 'be the rain that brings peace'. Upon reaching a tower at the source of the viruses, she has a flash back of an evil owl that's somehow responsible for the death of her loved one. Shooting at every virus she sees, she fights until her last breath. Wanting revenge for the person she had lost, she forces herself to awaken, and turns herself into an antivirus, promising never to quit until peace is restored.

All tracks written by Wonderful☆Opportunity. With PVs by Shark.

Retrieved from "https://vocaloid.fandom.com/wiki/Virus_Resistance_Series?oldid=999166"
Community content is available under CC-BY-SA unless otherwise noted.