VOCALOID Fanmade Promotion Video, also known as Fanmade PV, is the phrase used within the VOCALOID community to describe a video set to music featuring a VOCALOID.

PVs are commonly seen on video-sharing sites such as niconico and, sometimes, YouTube.

Promotional videos can range from animated shorts, typography, live-action films, and drawn images set to music. These concepts are to show support for the original song and those who produced them and are regarded derivations of the originals just like fan fiction.[1][2].

In the Japanese community, PVs are often made with authorization or commission of the original creator and/or groups. And it is not uncommon for groups, or circles, to include a illustrator or video maker to help. This is due to the more organized and professional level of the overall VOCALOID producer scene in Japan as many are indie, amateur or otherwise student musicians. The illustrator and animator scene is often absence from overseas fandom. Illustrators or animators of PVS are often paid or receive royalties from their works.

Fanmade PVs can result in making the original works more attractive and memorable due to their renderings and arts, which in turn brings in more support from a fresh audience. Some songs have become famous for their PVs and are often associated with them, with cosplayers and artworks being made based on the attire of characters within them. In addition due to the support of KARENT and piapro website by Crypton, a number of PVs have had figurines based off of these PVs. Project -DIVA- has also included modules based on the designs of the characters.

Below is an example of how a PV has lead to multiple types of tie-in promotions: 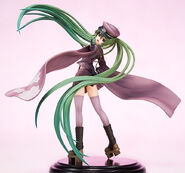 Good Smile Company figurine
Add a photo to this gallery

While Fanmade PVs can make the original works more popular, it must be noted that these concepts are subject to self-interpretations thus it may not be faithful to the author's original intent. This can include insertions of plots and settings that were unspecified or never present in the original. Songs like "ブラック★ロックシューター (Black★Rock Shooter)", "Corruption Garden" and "Secret" have featured characters that have been mistaken for the VOCALOID singer even when they are their own separate character.

Some popular PVs have been the center of arguments among fans who will use one interpretation over another to explain the purpose of a song. One such example is "Secret", whose title, song and famous PMV do not match each other. The song was a plagiarized work and its title referred to its hidden status as a song on the website Nico Nico Douga with it never been labelled as the title of the song. In addition the songs meaning has never been stated. Fans have often tried to guess the meaning of the song and due to the famous PMV associated with it , the meaning has often been misinterpretation with the PMV often greatly influencing the interpretation, even though it has nothing to do with the song itself.

Retrieved from "https://vocaloid.fandom.com/wiki/Vocaloid_Fanmade_Promotion_Video?oldid=867399"
Community content is available under CC-BY-SA unless otherwise noted.