DTM was a magazine first started in the mid-1990s in Japan and focused on DTM musicians. It often included a floppy disk, which was in later issues switched to a CD and then to a DVD. These disk contained various resources such as loops or MIDI files as well as demos of upcoming or released software. The magazine focused on various music based software, both as a review and also from ran tutorials.

The magazine had been vital in much of the promotion of VOCALOID, with the main focus being of the Japanese VOCALOIDs. This was particularly true for VOCALOID, VOCALOID2 and VOCALOID3 engines lifespans, with many details making their way into the magazine. In fact, a large proportion of its readers were VOCALOID producers and thus contributed much to the impact on VOCALOID for more then a decade of its existence since even before its release in 2004.

Especially in VOCALOIDs earliest days, there was limited promotional methods or funding for promotion, so the earliest Japanese VOCALOIDs had relied upon the magazine to sell them. One of the earliest examples of its impact was even found in the way it influenced sales. For example, the original release of MEIKO and the original release of KAITO both were impacted by the magazines readers. KAITO's article was covered in the April 2006 issue.[1] Because KAITO failed to sell well, this was pinned onto the readership of the magazine, since 80% of its readers were male and it has generally been viewed that female VOCALOID sell better in Japan over their male counterparts.[2] Though it feature an article on VOCALOID in 2005, though for the most part the original VOCALOID engine went mostly unnoticed.

The magazines prominent link to VOCALOIDs overall success would come with the VOCALOID2 engine. The November 2007 issue had sold out due to the inclusion of a demo of the voicebank, despite Miku having been out for 2 months prior. Prior to this, almost all of the news on Hatsune Miku and VOCALOID2 had come only from information from Crypton themselves and this is regarded as the first major promotion of the engine. Hatsune Miku was mostly expecting to interest only the readers of the magazine and thus was advertised in the magazine for her original release mostly only via the magazine, so was the only major pre-release planned promotion. Other forms of promotion came later.

The first sneak peak of Nekomura Iroha was issued in the magazine while the CGi model of Hatsune Miku Append was also featured in its pages as well as a first glimpse. It covered the VOCALOID3 engine heavily, focusing on particular VOCALOIDs such as Yuzuki Yukari and ran general guides from time to time on how to use VOCALOID. DEMOs such as Lily's original vocal were released with the magazine in addition.[3] The Kagamine Rin & Len V4X release was covered in the Feb 2016 issue.[4]

The magazine went onto feature a "VOCALOID NEWS" section in every issue by the release of VOCALOID4 and this section ran until the very last issue.

The Magazine no longer is printed, and exists via electronic form only. This move was due to the trends of modern times with printed media seeing less sales and electronic media taking over much of the markets focus.[7]

The magazine contributed as one of the main ways that helped Japanese VOCALOIDs became successful, with the THE VOC@LOID M@STER events and various early Internet Memes, being two of the main other contributions.

Note; the following is a gallery showing all covers featuring Vocaloids, but it is not a full list of every issue about VOCALOID in DTM.

The famous November 2007 issue with Hatsune Miku on the cover 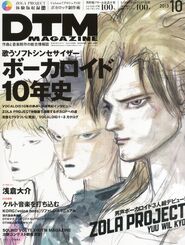 Early sketches of the Kagamines from DTM magazine