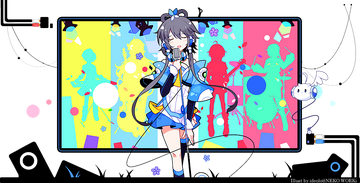 Vsinger (formerly VOCALOID CHINA PROJECT in 2012-2014, and VOCANESE in 2014-2015) is a project that develops and promotes Chinese VOCALOIDs. It is headed by Shanghai HENIAN, a small Chinese company that collaborated with Bplats, Inc..

To create strong support for the first Chinese VOCALOID, a contest was held to pick the most popular design. The winning entry, Luo Tianyi, became a VOCALOID while the runner up entries were included in promotions.[1] A second contest was held to find the design of VOCALOID CHINA's next VOCALOID.[2] There were 15 winning entries, with the grand prize winner, YANHE, becoming a VOCALOID and the rest were honorable mentions.[3]

On January 31, 2014, it was announced that VOCALOID CHINA PROJECT ceased activity, but future Chinese VOCALOID productions would be continued by YAMAHA.[4] Later, in February 2014, it was confirmed in an interview that YAMAHA was selling the character rights of the two Chinese VOCALOIDs and four promotional mascots to Shanghai HENIAN permanently. The project was relaunched as VOCANESE once the sales were finalized around March 2014, and the collaboration between Shanghai HENIAN and Bplats ended.[5]

On May 28, 2015, VOCANESE was relaunched as Vsinger. Shanghai HENIAN stopped using their VOCANESE accounts and started introducing themselves with their new name.[7] This name was formed after Ren Li, the former leader of Shanghai HENIAN, resigned from the company. The project focused more on the original band members and YANHE.

On July 14, Vsinger's official Facebook page was built and in their banner and About section, it was revealed that Lorra was no longer part of Vsinger.[8]

This is a list of the current Vsinger characters.

To advertise the VOCALOID CHINA PROJECT, a series of animations were produced to promote the winning entries of the first contest.