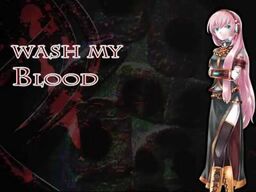 This song is by Deadball-P, who is known for writing controversial lyrics. This song is often interpreted as Luka being a nun who is supposed to maintain virginity. Luka has sex and hides her pregnancy, getting an abortion. She is so paranoid yet in love with the man she had sex with that she thinks that every time she has a period, she killed another child, like she did with her hidden abortion.

Many religions, especially Christian ones, regard these kinds of acts as mortal sins. It is also frowned upon generally. Numerous UTAU voicebank authors prohibit covering songs like this.

Retrieved from "https://vocaloid.fandom.com/wiki/Wash_My_Blood?oldid=1125145"
Community content is available under CC-BY-SA unless otherwise noted.