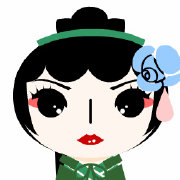 Xie Jiao Jiaozhu (邪叫教主; Xié Jiào Jiàozhǔ), is a Chinese lyricist who made her bilibili debut in June 2013 and specializes in the Gufeng (ancient Chinese) genre, though had shown other styles. Her lyrics were regarded to be bold and uninhibited, magnificent, and of high quality. She made her debut with a cover of "Cháng Gē Shā" and her first original was "Yīpǐn Zòng", both featuring Luo Tianyi. Twice, she had been invited to write the lyrics for the bilibili New Year Gala songs "Jiǔjiǔbāshíyī" featuring Yuezheng Ling and "Wàn Shén Jì" featuring Xingchen, both of which became her most notable works.