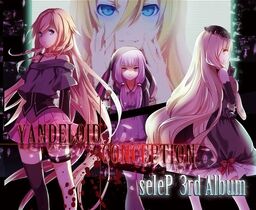 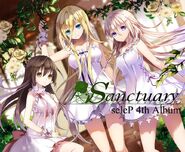 YANDELOID CONCEPTION is the third album released by seleP. The album consists of yandere songs (CARLA being the only exception to this rule since the song is about an ailing girl), the word "Yandeloid" being commonly used to describe a yandere VOCALOID. It features remixes of some songs already released in former albums, such as Chloe, Under of Fragments or Marie-Luise ; along with exclusive songs such as CHARLOTTE, ALETHEA or No,28.

All tracks written by seleP. Remastering by Signal-P.

Retrieved from "https://vocaloid.fandom.com/wiki/YANDELOID_CONCEPTION?oldid=1004867"
Community content is available under CC-BY-SA unless otherwise noted.