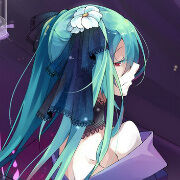 Yu Jianliu (裕剑流 Yù Jiànliú), also known as eaton YU, is a Chinese VOCALOID composer and PV maker from Guangdong. He started his VOCALOID works with Hatsune Miku, but primarily used Luo Tianyi and YANHE later on. His works focuses on storytelling. He's been active since 2010.

Yu Jianliu primarily writes Mandarin Chinese, Cantonese Chinese, and Japanese songs. Some of the songs are available in two or all three of the languages, though some are treated as spinoffs as they have an entirely different meaning or is based on another subject.

Retrieved from "https://vocaloid.fandom.com/wiki/Yu_Jianliu?oldid=1071999"
Community content is available under CC-BY-SA unless otherwise noted.