YurryCanon (ユリイ・カノン), born on December 21st[1], is a VOCALOID producer who started producing works since 2015. He mainly uses Hatsune Miku and GUMI. He specializes in rock, and often produces songs accompanied by high tempo and high key.

After his fourth work, Odoryanse became a hit, his later songs constantly entered the Hall of Fame.

Currently, his most notable works are Dareka no Shinzou ni Nareta Nara and Odoryanse, both having entered the Hall of Legend.

In 2020, he formed the band Tsukuyomi (月詠み) along with vocalist mikoto, guitarist Epoch, and bassist Toukasa.

YurryCanon does NOT permit unauthorized reprints of his videos. 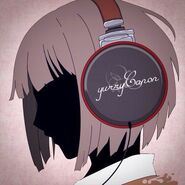