At the VOCALOID3 announcements, Vocalomakets was said to be working on VOCALOIDs, with a variety of different results. In late November 2011, the first of these VOCALOIDs were revealed, as it was Yuzuki Yukari.[1] Yukari was released on December 22, 2011.[2]

According to the later release of the VOCALOID4 vocal Kizuna Akari, the process for picking out Yukari's vocal was similar. The team brought in voice actors and singers, recorded demo voicebanks and decided on a voice that would work for both Vocaloid and Voiceroid with the guidance of AH-Software who had a method of making the Voiceroid and Vocaloid vocals match. The process of naming the character would occurring as the development of the character formed, based on collected ideas from members and the name would be the final pick based on what worked with their decided. The original team had busy lives and communicated about the project via Skype.[3]

In late November 2013, news on an updated version (which contained both Windows and Mac versions of her software) that was due for release on the 19th of December 2013 were published. The Software was released in 3 new packages. The first was a normal vocal plug-in with the "lite" version of VOCALOID3 and VOCALOID NEO. The second was of Yukari with the full editors included, plus exVoice.[4] The third version was of Yukari with Music Maker MX 2, a Windows-based DAW developed by Magix and distributed in Japan by AH-Software.[5] 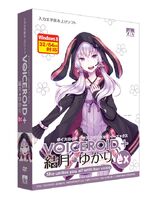 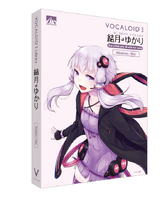 AH-Software released Yukari as a VOICEROID+ voicebank. She is the first VOCALOID to be released in both formats from AH-Software and the second VOCALOID to have a spoken version, with Gachapoid being the first via V-Talk. VOCALOID allows several tones of vocals that show different emotions. However, it is intended for singing rather than speech. On the other hand, VOICEROID offers the chance for users to make rap songs easier, or using her VOICEROID in conjunction with her VOCALOID voicebank, allowing her to "speak" during songs.

In 2015, most of the Voiceroid and Voiceroid+ vocals were upgraded to Voiceroid+ ex, Yukari included.[6]

ExVoice contains additional samples for Yukari, some of which include laughter, giggling, and weeping. The software has also been updated to add more samples to the package. Users can log onto the AH-Software website to retrieve the additional samples if they own the older version. More updates on this extension are planned in the future.