Zips (じっぷす) is a producer mostly known for the production of Heisei Project, along with his activities as a Utaite. Currently, he is the composer for the musical unit TUYU (ツユ).

In 2012, at the age of 18, he began his career as a VOCALOID producer, with the representative work being "Heisei Project"[2]. He also began singing some time afterwards.

On December 10, 2015, he announced the change of his name to Pusu (ぷす), ceasing all activities under the previous alias[3][4]. In the same year, he formed a duet unit named "Miyapusu" along with fellow utaite Miyakawa-kun.

On April 2019, the closing song of Heisei Project, Heisei Sayonara Bye Bye was released.[5]. Afterwards, on May 23 of the same year, he released a statement regarding his retirement as a utaite.[6][7].

A month later, on June 12th, 2019, Pusu formed the new musical unit TUYU (ツユ), which consists of him as the music composer and guitarist, Rei (礼衣) on the vocal, omutatsu (おむたつ) as the illustrator, AzyuN as the video maker, and mirio as the pianist. Additionally, he is also an independent producer who does songwriting, arrangements, etc. 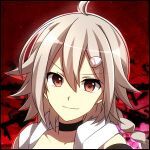