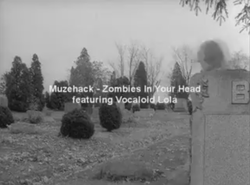 “So a little explanation about this song/video. I've always been a big fan of the "Living Dead" movies and George Romero, so when I found out that the original NOTLD was public domain, I had to make a song/video with it. The song is basically about bad thoughts or habits that you think are dead and buried, but they keep coming back to haunt/destroy you. With the title "Zombies in Your Head", I thought, what if the zombies were really only in their head? So I edited the zombies out of the film so it just looks like two paranoid people running around. You notice, that they barricade themselves in the house, in order to escape their fears, but it turns out at the end what they feared was inside all along.”

Zombies in Your Head is an original song by Muzehack featuring LOLA.

Retrieved from "https://vocaloid.fandom.com/wiki/Zombies_in_your_Head?oldid=987625"
Community content is available under CC-BY-SA unless otherwise noted.